Why did the lorry flash its high beams?
When a lorry passes another, it is usually hard for the passing driver to know when the rear end of his trailer has passed and it is safe to move back to the right lane. The one who gets passed will therefore often flash the high beams as a signal indicating when it is time to change lanes.
Other resons may include: salute a friend, signal to an oncoming to switch to low beams, mistake when fumbling for another control and a signal that something is wrong with the vehicle ahead.

How best to pass?
Start out from a point ca 20 meters behind the lorry. If you are closer, its driver won’t see you and you won’t see what happens ahead of the lorry. When you have decided to pass, you accelerate for one or two seconds while blinking, then move to the passing lane and keep accelerating. It isn’t remarkably dangerous to drive beside a lorry in a two-laned road, but it will be easier for everybody if the overtaking is done quickly and decisively.
Texas Department of Transportation recommends:
“Always leave at least four car lengths between the back of your car and the front of any large truck you pass”. This is because lorries have longer breaking distance than person cars, so if you need to jam the brakes, the lorry will need this extra distance to stop. Swedish lorries usually have good brakes, so in practice the risk is not much higher if we move back 15 meters in front of the lorry than 20 meters, and almost all drivers handle this well.
A driver of a car shouldn’t have to keep track of a lorry’s blind spots. However in this case consider that a passing car or motorcycle dwells for a moment in a blind spot to the left of the driver’s cab. If they cut in front of the lorry immediately after passing, it can trigger the truck driver’s brake reflex, and if it happens often, the driver will become jaded, which is dangerous.
Consider not overtaking if it slopes downhill or if on top of a hill. Lorries otherwise driving 80 km/h will often reach 90 or 100 km/h when it descends. Then they don’t want to brake because they save almost €10 on fuel by keeping the speed. It is a saving for the environment too as you are well aware.
Can I pass in this roundabout?
Some roundabouts have so broad carriage ways that a driver of a private car may get the impression that they have two lanes. They haven’t, unless two lanes are marked in the asfalt. If the roundabout is small, it won’t be possible for a 13m long trailer to keep within a lane of normal width, so the road is broadened. That’s why it is ill-timed to pass trucks, 18-m trailers or busses in such small circuses. Even in roundabouts with short radius but two lanes marked will it be appropriate to avoid a position alongside tractor or trailer. If the roundabout is large — of the kind that is common outside the towns — and has two lanes, then dwelling next to a lorry or bus will be fine. 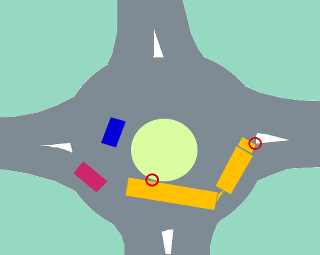 The orange in the picture is a truck with a trailer. It has to be all the way out to the traffic islands and the edge of the road with its nose to make the left rear wheel clear the curb that marks the inner edge of the road in many roundabouts (see the red rings). A car could easily pass another car, but is better to refrain and treat the roundabout as having just one lane.
A novelty is some municipalities having marked two lanes even in very small roundabouts. Such decisions aren’t necessarily based on more consideration than you as a road-user is expected to perform in a fraction of a second when sharing a circus with a truck. So think for yourself, think out of the box and don’t take for granted that a lorry can stay within a single lane.
What are the risks when overtaking?
There may be something along the right edge of the road that compel the lorry to move to the passing lane or brake. If it rains, a lorry with dual wheels can splash an amazing amount of water on your car and push you off course, and if you were in lee beside the lorry you might be hit by sudden winds when passing. So, keep both hands on the wheel!
Extra passing lane uphill
A max-loaded lorry with trailer can weigh 64 tons in Sweden. It is hard to keep 80 km/h uphill with such a burden. This has been solved in some places by, as long as the slope lasts, providing an extra lane for lighter cars who want to pass heavier trucks.
Lorries and slip roads to motorways
When entering a motorway, one is supposed to adjust one’s speed to that of the traffic on the motorway and find a gap to slip into. Here it is easy to make the mistake to adjust one’s speed to a lorry. However if the max velocity is 120 km/h and a car entering the motorway brakes to move in behind the lorry, it will slip in at approximately 60 km/h. Driving so slow for no good reason should be avoided.
If you find yourself alongside a lorry and you are past the middle of it, feel free to drive faster than it and take the place in front of it.
Turning
One of the major reasons why we should blink when exiting roundabouts is because it takes ca 7 seconds for a lorry to accelerate up to 25 km/h and get out with the whole trailer in the circus.
In a heavy traffic roundabout, consequently, the truck will get stuck without getting in. But if any of the cars in the circus blink out, it will give the lorry a chance to accelerate.
If you come from a road that a lorry will turn on to, it may happen that the truck slows down and flashes its high beams. It means you should move first, because it would be hard for the lorry to bring its trailer on to the smaller road without using the space where you are. Remember to give way to other traffic as you go. 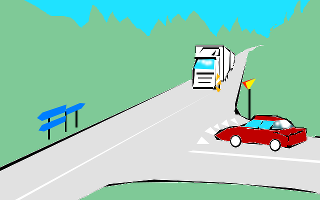 Pedestrian crossings
It costs a lot of money to brake and accelerate with a lorry, so if you stand at a zebra crossing and a truck brakes, it is time to cross immediately.
Reversing lorries
If a lorry turns on hazard lights in an ordinary street, it will probably reverse. If you are behind it and the reversing lights illuminate, don’t hesitate to pass.
When a truck with dolly and trailer reverse, the driver needs space to move the front of the truck to the right and to the left in order to make the trailer move in the right direction. So, if you see a lorry reversing across a street, even if you are in a hurry, it will get out of your way faster if you leave three meters distance while waiting for it to get off the road.