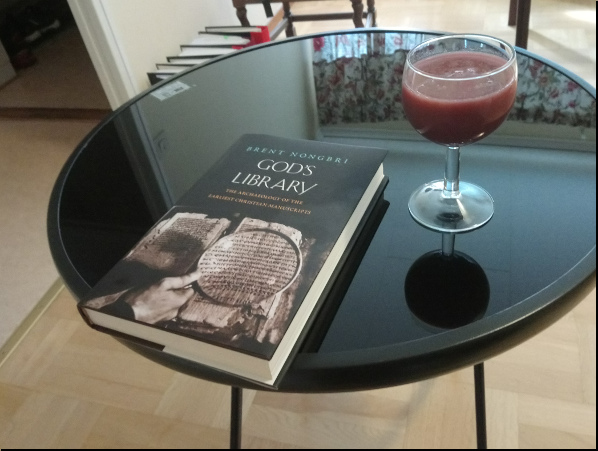 Brent Nongbri became my favourite papyrologist after he argued for 𝔓75 being 4th century. Its earlier date-range in the 2nd-3rd centuries had puzzled me.
Now we read about this new book, modestly named “God’s Library — the archeology of the earliest Christian manuscripts”, that “Brent Nongbri […] demonstrates that much of what we thought we knew about these books and fragments is mistaken”.
Surely that depends on what we were thinking.

God’s Library provides us with an introduction to various ways of dating manuscripts: by the binding, by the ink, by 14C-analysis, by the script, by colophon and by the other manuscripts it was found together with. It proceeds to discuss the uncertainty of each method. Chapter 4 gives a detailed account of the discovery of the Chester Beatty group of papyri, chapter 5 presents the Bodmer papyri and chapter 6 the Oxyrhynchus papyri. These chapters also provides tables with facts about each manuscript and discusse their probable production date.
A testimony to Brent Nongbri’s studiousness is the column titled “Material”, which for the Beatty papyrus mss has the same entry for each row. Can you guess it?
Continuing to chapter 7 “Fabricating a Second-Century Codex of the Four Gospels”, it doesn’t tell us how to do that, fortunately.
Dating
A central opinion expressed in this book is that mss should be dated younger than their most likely age rather than on the optimistic side, because if a manuscript has an early date, its museum will not want to risk exposing it to a 14C-analysis and risk having its date revised so that it becomes less attractive for visitors.
Another reason could be that some scribes were conservative and held on to a writing style that was popular a century ago. Would Christians do this? I think so because Christians are sometimes a bit conservative …

And I was advancing in Judaism beyond many of my own age among my people, so extremely zealous was I for the traditions of my fathers. — Paul, Galatians 1:14, ESV.

Towards the end of the book there are 70 pages of notes that you should read, then 30 pages of bibliography, an index and a conversion table between 𝔓X and their abbreviations. The magnifying glass pictured on the cover of the book would be excellent for reading the notes.
Market
On pages 270-271 we read:

And the topic of conflicts of interest brings us to the other leitmotif of this book: the commercial trade in ancient artifacts. The antiquities market has cast a shadow over this whole study, obscuring the archeological knowledge that we most wish to access. The market is the enemy of archaeologists, but at the same time, it is often the source of their objects of study.

This inimical attitude towards markets and private ownership saddens me. The Egyptian antiquities market isn’t completely free. A manuscript can be split among the persons who discovered it precisely because there is not a single person who owns the site and who’s ownership is respected.
A free antiquities market is particularly good when there are historical questions that are controversial and that the government wants to answer in a specific way. For example, where I live it is important to maintain that Christianity arrived to all parts of the country at around the same time and that no Goths have been here. A few miles away, there’s a medieval fort dating to the 12th (or maybe 13th) century, but the place has been inhabited since bronze-age. During excavations, a “Gothic cross” was found in the soil. However, after it was kept by a state-controlled museum for a while it got lost.
If we return to the book, God’s Library is not a must-read in order to have faith in the transmission of the biblical text for two reasons. 1) There are lots of people who keep track of ancient mss and who will sound the alarm if they are fake, such as this blog: https://lyingpen.com/, and 2) we shouldn’t have too much faith but do textual criticism and discover a purer text.
But it is a good read which covers most of the subject of biblical papyri from Egypt.
In Sweden God’s Library is available from Bokus, among others. Also, bookmark Brent Nongbri’s blog — Variant Readings.