As with all discussions of technology that is so new it doesn’t really exist yet, some people compare it to successful inovations (e.g. the Internet) in order to preridicule the pessimists, and some compare it to market failures (e.g. video conferences) in order to make the optimists sound suspect. There is a middle outcome too, that of robotic vacuum cleaners that are slowly gaining market share and that of the paperless office that came somewhat true but didn’t defeat the office stuffed with paper. 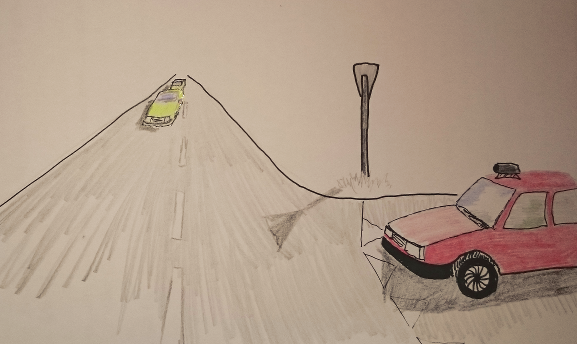 The image above exemplifies just a few issues that driverless cars need to be able to handle. It is going to turn right in the crossing and the sun is reflected in the side-window of the green car. An experienced human driver would realize that it is impossible to know whether the car behind the green car blinks left or not, due to the reflection of the sun, so he/she will wait a little. Can a robot ever be sure that a flashing indicator is unlit?

Suppose the autonomous car turns right in the crossing just when the farthest car changes lane to pass the green one. Now they are on course to collide. Even though a robot reacts faster than a human, in this case the human drives faster and is the only one who might be able to avoid the head-on collision. He/she brakes hard and turns in behind the green car, loses traction, slams into a road sign and crashes into a tree on the other side of the road.

Since the autonomous car was involved in the accident, it is liable to stay on the site and do its best to help anyone who was hurt. Will the robot even know that an accident occurred or just note “2017-05-26 13:41.15 43711 – Car in wrong lane. – Avoided collision.” and keep rolling?

I believe, in spite of all the problems and lethal accidents that will occur, that autonomous trucks will take a substantial market share in transports, because the change involves a lot of options for individuals to make money by simply acting irresponsibly. To be irresponsible and make money at the same time is The Dream for lots of people. However, the amount of work needed to instruct a robot to do everything a truck driver used to do, is enough that most cargo transports will still be manned until ca 2035. This is my prediction. What is yours?