Certain parties and ideologies hold that it would be good for society and the environment if more people traveled collectively, that is by bus or train. They rarely mention goods.

So, in socialist countries in Scandinavia, there are lanes that only busses may use. On the contrary, there are signs saying trucks may not pass certain streets. Bus good. Truck bad. Nonsense. 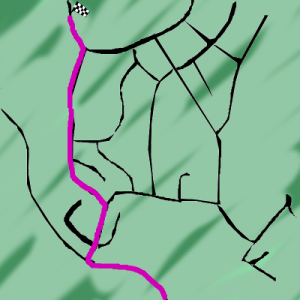 I was driving a lorry to an address recently in Norway. It looked like this on the GPS. Unfortunately, the indicated route was blocked with a bar. I had to back and try another route, which was blocked too. There turned out to be bars in all places marked red in the map below, orange is where I had to reverse and yellow is the extra distance I had to drive before finding the only open route to my customer, which is marked green. 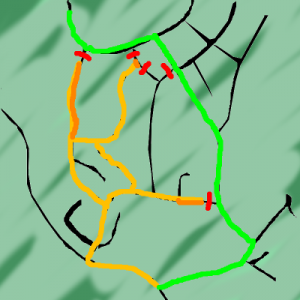 I do not want to drive a truck unnecessarily through residential districts, especially not reverse near where children play. But certain politicians want me to. And I want you to understand this, because they are clearly trying to use you as a fool-tool – a desinformed citizen who can be made to support policy contrary to your own needs. 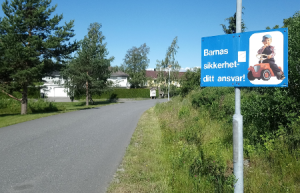 Translation: The childrens’ safety your responsibility

In contrast, in the judeo-christian tradition, the person or group of persons who causes something are responsible for what they cause.

The trend right now is to reduce the number of routes to travel from A to B to just one alternative. There are various reasons for this. If police want to intercept someone, they just need to block one passage. If government want to know when you leave your home, they only need to monitor one road.

Consequently, at some point in the future, when I hope you and I won’t have a reason to drive in Scandinavia, cars will get cracked and it will have more serious consequences here than in, per say, New York.

By the way, to a certain extent children must be made gradually more responsible for their own safety. It would be nice if we can find a balanced approach. The signs in my Subaru Impreza are pretty sober. The one in the picture below says: “DO NOT place rear-facing child seat on this seat with air bag”. 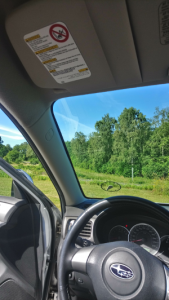 As you can see this is the driver’s seat. If I ever get to father an infant of course he or she will be able to drive from a very young age. But I will certainly not require my children to drive while facing backwards.