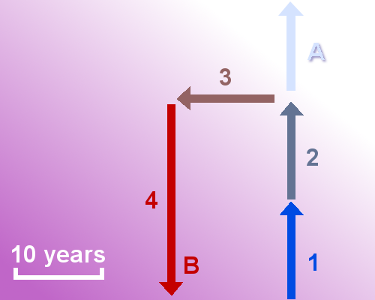 This chart may be useful since many people seem to make the mistake of assuming that an organization’s opinion, doctrine, stance, position, reasoned consensus or whatever they might call it, will forever remain constant. Not so!

To the contrary, there seems to be a trend where the leadership of an organization narrows down the opinions that members may express, to just a few (we say that it converges and becomes a converged organization), and then changes them. The point of doing so is to get rid of honest members, because a honest person will have trouble defending opinion A, and then switch to defending not A.

If you look at the chart, first a certain organization supports A, they want to make a U-turn and reject A, so they go quiet for a number of years, and they do their best to ensure that only persons within the leadership who participate in the U-turn get to write articles, books and other critical stuff that will remain accessible. This is phase 2. In addition they might publish books and articles with a very limited readership, where they support the new stance.

The next step – 3 – will involve indirectly supporting the new stance B. The brightest and most honest members will react. They are identified and lose their membership for the stated reason of being apostates. Please note that today, it is typically the organization which apostatizes more often than individuals.

Finally, another handful of years later, someone will get the prestigious task of writing that article which concludes, based on publications in phase 2 and 3, that B and not A is, and has always been, the position of this organization and that, whereas they have always tried to allow for a multitude of opinions and wills, the confusion caused by some individuals who argued for A distracted from the organization’s main activities and had to be dealt with.

One more observation would be that the time that has to pass for phases 2 and 3 to complete used to be ca 1 generation, that is 25 years. Around the shift of centuries I saw several organizations cutting it to 15 years and today it seems to be 5 – 10 years.

If you are a member of an organization you may wish to check their meta-headers in the HTML-code and the robots.txt document in the root of their server (https://their.server.name/robots.txt) to see if they use the tag unavailable_after: [date/time] or a variant of noindex in pages which hold articles you agree with.