This tactic applies on a large scale as well, except in war-time when people, organizations and empires want to appear powerful in order to get a psychological advantage. Holy scripture has survived many wars. It is perhaps more difficult for it to survive peace. In this article, let us look at two examples of when God has been described as “almighty” in the scripture of the Christians. 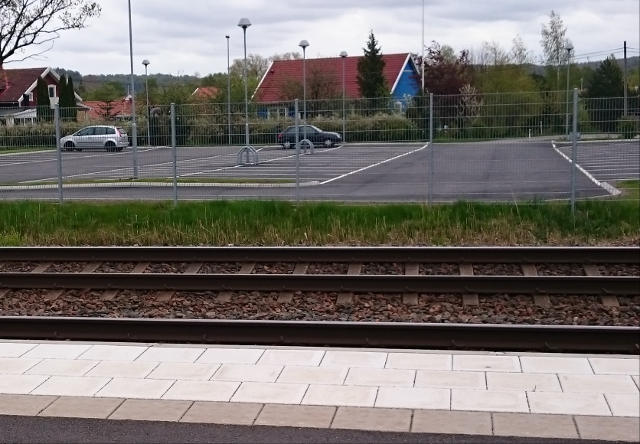 A fence prevents travelers from moving freely near a railway stop south of Gothenburg. If someone chases you in that direction you will be caught and perhaps shot dead.

The first example is from the Apostles Creed (Source: Schaff/CCEL). It begins like this and I marked a pattern in colours:

The verb credere typically means “to have confidence in a person or thing” or “to entrust something to somebody”. Someone who “credit Deum patrem omnipotentem” could either express a democratic wish that God may remain both father and almighty (because he is doing a good job), or express a religious belief that he already is. How did the Church go from this ambiguity to all out conviction? Later versions of the creed typically adds:

Since whether or not God created heaven and earth isn’t a question for contemporary politics, the ambiguity is gone and “omnipotent” becomes a sticky label that God cannot get rid of. Or can he? To make sure he can’t they added another gloss near the end of the creed:

In Luke 10:21 Jesus calls God “Lord of [the] heaven”, according to papyrus 45 and reconstructions of Marcion’s edition. Most manuscripts and Bible editions today read “Lord of heaven and earth”.

It can be argued that the longer variant should be preferred since it is more difficult to reconcile with, for example, Jesus’ prayer “let your will be done on earth as it is in heaven”, which seems to assume that there be a difference between how much influence God has in heaven, versus how little influence he has over earth. On the other hand an addition of “and earth” could be a harmonization to Matthew 11:25.

So even though this is a tight contest between two credible variants, I know of no bible printed without “and earth” in Luke 10:21. How is that possible?