I had an occasion to visit this monument recently, so I thought “Hey, we desperately need yet another crazy idea about its significance!”, so here we go… 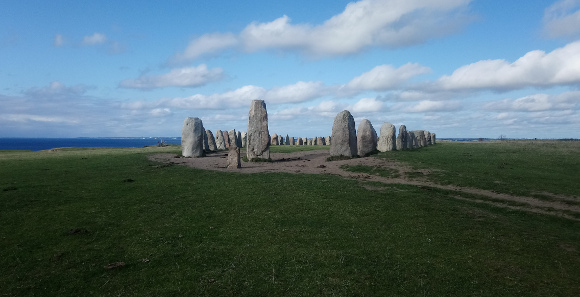 END_OF_DOCUMENT_TOKEN_TO_BE_REPLACED

A table which compares the phones of Bornholmsk (Espersen 1908 & Prince 1924) with those in mainland Scanian (from the north-western area according to Lucazin 2010).

1 Since the sources predate IPA, Prince doesn’t mention it and it doesn’t exist in Danish, my sources really don’t say what it sounds like, but [ɑʊ] is likely.

2 [eː] I am pretty confident that this sound isn’t a common realization of /ē/ in NW Scania, since I grew up in NW Scania and I can pronounce it in speech only with very much difficulty. [ei̭] possible.

3 actually [ei̭ː] is the notation in Lucazin p. 27. Certainly, in the NW, the i is pronounced longer than the e.

5 This should probably be a diphthong instead.