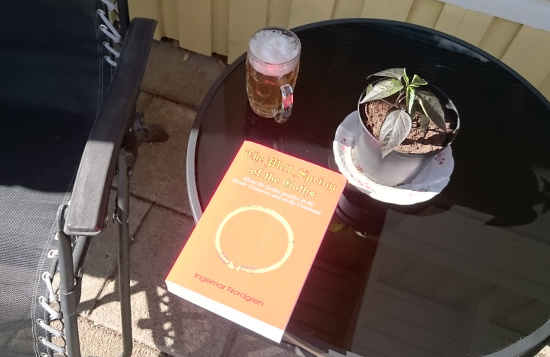 The question: “Where was the origin of the Goths?” is obviously not well put. Since we will never find out why they came to be called Goths, it should be hard for us to pin down the time and place where this appellation stuck.

END_OF_DOCUMENT_TOKEN_TO_BE_REPLACED

OPINION In Finance, Liquidity is a property of assets, measuring how easily they can be exchanged for other assets in a market. Surprisingly, this property turns out to be very important.
END_OF_DOCUMENT_TOKEN_TO_BE_REPLACED

I caught a train to København (Copenhagen) today, from Hässleholm in Scania. It had been a couple of years since I rode a train in Scania and the one thing that has changed since then is the composition of passengers with regard to their country of origin. It used to be 80% Nordic (Swedish/Danish/Scanian) but now it was less than 50% Nordic in my car in both directions.

I sat down next to two men who spoke Arabic, however the teenage boy across the gangway, and his family, spoke a language I could not guess — Albanian it would turn out. He asked me if I spoke English and was relieved that I did. Later when the family were pulling down their luggage from the racks he asked me if this was Malmö Central Station. I replied that, “Nope, it’s Lund. Malmö is the next stop”, and they avoided disaster.

The Arabs next to me said they were going to Copenhagen, yet got off in Malmö. When the ticket-collector came by in the tunnel neath Øresund, he asked another Arabic-looking family where they intended to get off. “Malmö”, the man replied. “In that case you have travelled too far. This is Denmark.”
END_OF_DOCUMENT_TOKEN_TO_BE_REPLACED

Gothic has been written in particularly three scripts (fuþarks or, as some call them, alphabets) — the Elder Fuþark, Wulfilan Script and (today) Latin. Of these, Latin has the best support on Internet-connected devices; indeed you are reading this in Latin script. The Latin alphabet, however, does not match the sounds or characters of Gothic speech so the Latin transcription has added two special characters: þ (thorn) and ƕ (hwair).

In 1999, the Elder Fuþark was included in the Unicode standard so that it is available to most Internet surfers by downloading and installing a font. The runes are scattered across the range 16A0–16FF.

With more and more devices supporting Unicode better and better, it is time to ask the question: Is it time to switch back from Latin script to Wulfilan? If not, Latin will certainly stick and cause usage of the special characters to once again disappear from a nascent reconstructed Gothic as it did from Germanic languages in the Dark Ages. But if the switch should happen completely, it may present beginners with a brick-wall of boxes or invisible text, rather than a learning curve, ever so steep.

A solution which tries to both eat a cookie and save it for later, uses Wulfilan script for upper-case except when the Wulfilan character is problematic due to confusion with a Latin character of different value or when the corresponding Latin character is so similar that it does not matter which one is used. For lower case, it uses the Latin transcription which is already in wide use. Upper case letters aren’t used that often in a text, so they can usually be figured out if they do not show properly. An additional simplification is to take the Gothic character which is shaped like a Y, and which is pronounced either w or like a german ü (Nordic and Koine Greek Y) and let it map to y. This frees w, which can be used to represent the hw-sound of ƕ.

The proposal is exemplified in this PDF: Gothic-script-draft