Papyrus 967 is an early witness to the text of the Translation of the Seventy — the Septuagint (LXX). The lines contain on average 24 characters shaped like 2-3rd century CE.

The whole story is less focused on the persons involved — their names and relatives — than it is in later manuscripts.

END_OF_DOCUMENT_TOKEN_TO_BE_REPLACED

When reading Gothic text, or composing, you might find that certain pages of your grammar get turned so much they risk falling apart. What you need is a cheat sheet — the most frequently used information on a single sheet of paper. Here it is! Download & print and please let me know in the comments if you found it useful.

Let’s do one interlinear in Hebrew (Dead Sea scrolls and most Masoretic read the same), one in Greek (LXX) and one from Jerome’s Vulgate in Latin, and see what we get.

There has been some discussion recently, about what Yeremiah actually means in his chapter 7, verse 22.

For I did not speak with your fathers, Nor did I command them in the day of My bringing them out of the land of Egypt, Concerning the matters of burnt-offering (עולה) and sacrifice (YLT)

END_OF_DOCUMENT_TOKEN_TO_BE_REPLACED 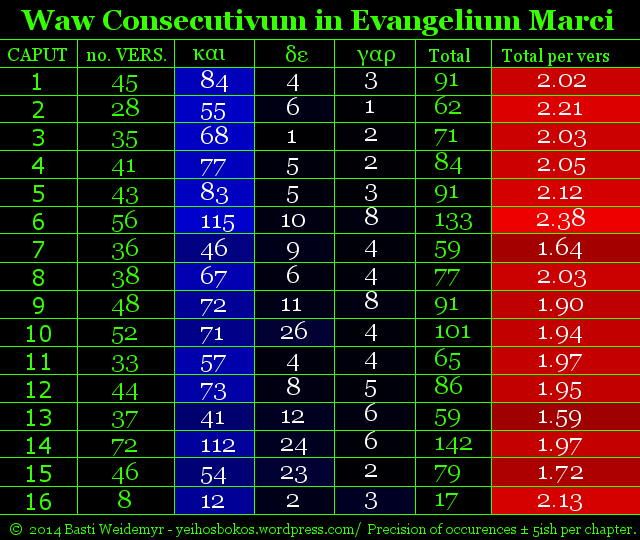 Hold your breath because this is doctrine-critical!
You do not often see Swedish mentioned in the context of biblical translation, but in a lesson about the Lord’s Prayer in Gothic[1], by James Marchand, the word fraistubnjai is connected to its Swedish cognate frestelse.
The lesson is actually a way to show how a 17th century Dutch scholar (Fransiscus Junius) would have understood Codex Argenteus, the Silver Bible.
It says: “in fraistubnjai = looks like the dative of some funny noun ?? As Junius, we would recognize the connection with Swedish frestelse ‘temptation‘, for example. We may have even eaten Janssons frestelse, that tempting dish of tempting dishes.”
Everything about this is fine* except the appearance of ‘temptation‘ next to frestelse which would seem to indicate that the two words had the same meaning. In today’s Swedish and Southern dialects frestelse usually means one of two things: temptation or strain/exhaustion. The English word temptation would cleanly translate into Swedish lockelse, while strain and exhaustion may both be translated to påfrestning, which is probably a hint to the old meaning of the verb fresta that frestelse was formed from.
So far the understanding by a native speaker of a Southern Swedish dialect an my thesis is: fraistubnjai meant any one of trial/exhaustion/challenge rather than temptation. Now, a few examples from a lexicon, namely the excellent Wordbook of the Swedish Academy (SAOB).
Under frestelse we find:
1560: Thenne höglofflighe Furstes Konung Götstaffz älende, betryk, farligheeter och ovpräknelighe frestelser och mootstånd.
EN: This very commendable Principal King Götstaff’s misery, depression, dangers and uncountable frestelser and backlashes.
1660: Konglige Cronan hafwer hos sådane höghe en stor frestelsse.
EN: The Royal Crown has among such high [persons] a great frestelse.
1712: Den följande natten hade vi åter en frestelse af Araberne.
EN: The following night we had again a frestelse from the Arabs.
1750: Denna hastiga omväxling i väderleken, från vackert til en fuktig köld, är en farlig frestelse för helsan.
EN: This hasty change of weather, from beautiful to a moist cold, is a dangerous frestelse to the health.
If the old meaning of frestelse was trial/exhaustion, the usage case from 1660 can be explained as a test [of the person’s loyalty and resistance to temptation]. If the old meaning was instead temptation it would take some imagination to come up with an explanation of the other usage cases and how the meanings of trial/exhaustion established themselves for påfrestning and in the last few centuries gave way to temptation as the meaning of frestelse.
When Janssons frestelse is described as a frestelse, the hearer sees the scent wrap itself around the victims’ noses and necks, wrestle them down on the floor and drag them mercilessly to the table, in much the same way as a pirate, equipped with a knife, wrestles down a traveller, cuts him till he bleeds and leaves him powerless by the roadside as the pirate rides away with the traveller’s silver.
How about other languages?
Greek
The corresponding Greek word is πειρασμόν, accusative of πειρασμός. It is used, among other places, in the Septuagint in Exodus 17:7:
καὶ (so) ἐπωνόμασεν (he called) τὸ ὅνομα (the name) τοῦ τόπου (of the place) ἐκείνου (that) πειρασμὸς (מסה) καὶ (and) λοιδόρησις (מריבה) διὰ (for) τὴν λοιδορίαν (the quarrel) τῶν υἱῶν ( of the sons) Ἰσραὴλ (Israel) καὶ (and) διὰ (for) τὸ πειράζειν κύριον (Yehovah) λέγοντας (saying) εἰ ἔστιν (is not) κύριος (Yehovah) ἐν ἡμῖν (with us) ἢ οὔ (or not).
So here, peirasmos corresponds to massah, which could mean melting or be a substantivation of nassah (נסה) meaning trial, providing a link to the Aramaic below. Massah is usually translated as test (NASB, NIV, NW) here in Exodus, but some, like ASV and King James’ versions stick to tempt.
Other places are: Deuteronomy 4:34 and a similar form in Genesis 49:19, where Gad will get either tempted by tempters or pirated by pirates, unless someone has a better idea. And if pirate looks like a cognate of πειρατήριος it may be because it is.
Latin
Hieronymus Vulgate has: “et ne nos inducas in temptationem, sed libera nos à malo.” Bezae-latin reads similarly.
Codex Vercellensis: “et ne nos inducas in temptationem sed libera nos a malo”
Vulgate Clementianum and some early commentators use the spelling tentationem which may be the same word. Lexicons typically lists the meanings trial and attack for both temptatio and tentatio, then as a third, unusual alternative: temptation. And where was it used in this sense according to lexicons? In Matthew 6:13 and other places in the Vulgate.
Aramaic
This prayer made its appearance in connection with the Sermon on the Mount. It was probably spoken in Gallilean Aramaic or some other Aramaic dialect. The word used here in Old Syriac as well as in the Aramaic of the Peshitta is ܢܣܝܘܢܐ (nesyuna).
Payne-Smith lists trial, temptation and mentions a word spelled the same way but vocalized differently, meaning weak, morbid.
CAL reverses the order of temptation, trial and gives sickness as the other meaning.
Conclusion
Some people do not like to have a conclusion pushed down their throat and in any case, knowlege that leads to life should be accessible to a person who serve God and studies his word with zeal, so you have to draw your own conclusions, possibly based on further research. Peirasmos/nesyuna appears in several places in the New Testament. For example, after Jesus was baptized, he went through something in the desert, and if you want to dig deeper you can read James 1:9-15 in Greek. And whatever you do, do not suffer more fraistubnjai than you have to!
*It is not important but the name Janssons Frestelse was probably applied to this dish for the first time in late 19th century, 250 years after Junius made his translation. See Wikipedia.

[1] Dr James Marchand’s Linguistic Lessons, 2003
http://the-orb.net/encyclop/langling/marchlessons/lingintro.html
Edited 26 April: Moved the comma to its right place in the reading of Codex Vercellensis, and changed the direction of a breathing mark in Exodus 17:7.